(30039 is the engineering drawing number, 53 stood for 5" base stage, 3 was for the number of stages, and 63 was the stroke. These were used on 3 axle units. For tag axle units the last number changed to 72.

Arm Cylinders: 4 X 51 Lantex for outside of body (pull type)

Packer Cylinders: 6 X 59 or 6 X 69 depending on application (some were Lantex, some were Meta Tool Company)

These photo's were taken in March 1980, shortly before we moved to the Marquardt add-on. The rain was heavy that year and the men were standing on the pallets to stay out of the water and weld. When the machines started to blow up, we shut down. 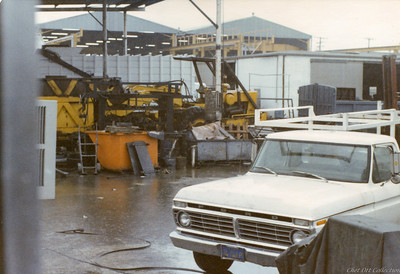 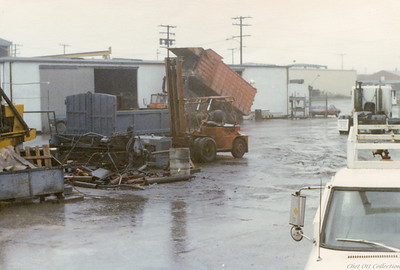 The beginning of the 1980's saw change for C&O. Having out-grown their location on Imperial Hwy, they moved to a new location off Marquardt Ave about a mile down the road in Santa Fe Springs. Even though they were doing well in sales, the recession had not left them untouched. Chet made it known that C&O was up for sale in 1983 and got several soft offers from companies like E-Z Pack before Dempster filed a letter of intent, which sealed the deal.

On June 6, 1983  Dempster had finally gotten a foothold into the Southern California market after 30 years of trying to compete using their heavy East Coast bodies and C&O became their West Coast Headquarters. Dempster at this time was owned by Krug International operating as Technology Incorporated. To read more about Dempster, please read the article on Classic Refuse Trucks. 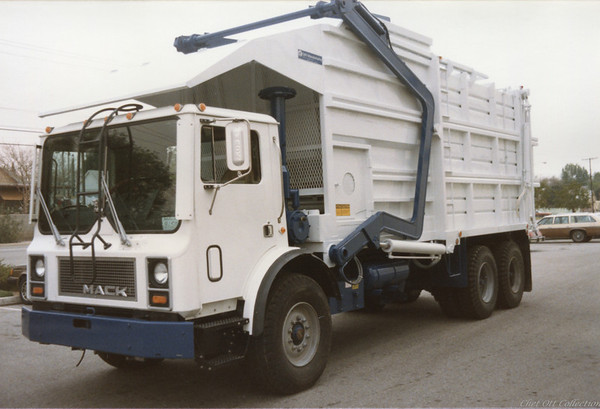 Rare truck with unique bracing pattern. Caption on the picture only said it would be available from stock as of 6-4-85 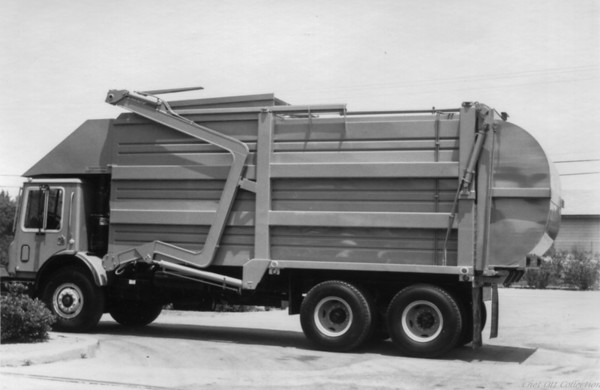 Caption: "Truck had to be water tight 24" up because of the milt the kids threw away. More than one unit made, can't remember how many."
You can see the water tight welding in the gap between the body and tailgate and also the early style of automatic tail gate locks

Former Dempster West Coast division employee, Brent Farlie, wrote Classic Refuse Trucks about the troubles Dempster had prior to the purchase of C&O: "It was our input about the market in California and the local manufacturers that forced Dempster in to the lightweight market [the eventual purchase of C & O Manufacturing]. We were getting our brains beat in trying to sell a Dumpmaster against pretty much anything available (Bowles, Bemars, AMREP etc). The main office just couldn't believe that we were that far off in price and weight, so they stalled far too long in doing anything about it."

After the sale,  Chet became Vice President as part of his 4 year contract with Dempster and all of the employee's stayed on. For a time it was business as usual. In advertising, Dempster made the distinction between their East and West Coast divisions, boasting they they were a national one-stop shop for the waste industry. The C&O line up stayed the same, however Dempster didn't push their Full Packs in order to mitigate competition with their established Full-Pack line. C&O already had a "heavy duty" Partial Pack which became popular with Waste Management and other companies back East due to to dealer market Dempster brought.

By 1986 Chet was un-happy with what Dempster had done with C&O and tendered his resignation. The Reno trade show which debuted Chet's Ultralight Partial Pack was his final appearance with C&O. Dempster continued under the  ownership of Krug International until 1990 when declining profits and labor issues forced them to sell to WasteEquip. Under WasteEquip's management, the C&O line was discontinued and Kosti Shirvanian, owner of Western Waste Industries, bought what was left of C&O to start Stagg Body. Red Herris, C&O engineer, went on to work for McNeilus and designed their Pacific Series Front Loader.

After he left, Chet went to work in the auto wrecking/scrap industry, built a sand and gravel plant near Palmdale and worked as an independent contractor in the Southern California area before retiring to Nevada.

Never one to sit still, Chet still does odd jobs out of his workshop and enjoys the constant visits from his children and grandchildren.