I have a confession. I fell in love with garbage trucks and the waste industry at a very young age. The front loader that serviced my apartment complex twice a week holds a special place in my heart and I still remember the name of my garbage man, George Minter, who let me pull the cable levers to lift and level the containers. For a young boy, there was nothing cooler in the entire world. The family who built this truck is the object of this month’s article and in my mind a big part of why front loaders are my favorite type of collection truck and why I love this industry so much. To them and George I dedicate this month’s article for they will never know how much of an impact they have had on my life.

To start telling this story, we have to start at a time when the commercial refuse equipment we know of today was non-existent. Ed Kouri served as a SeeBee in the Army during World War II and after the war ended, came to California and started working for Vincen Bowles. The S. Vincen Bowles Company in Los Angeles, California started 1947 building heavy equipment for use in construction. It was not until 1952 when Vince built the first front loader and changed the refuse industry forever. Ed Kouri was a welder and shop foreman for Vince by this time and helped construct many of the earliest front loaders and roll-off trucks in Western United States.

Seeing the vast market Los Angeles and the West Coast held, Ed decided in 1960 to break off from Bowles. He teamed up fellow Bowles employee Dewayne Bolme and Ken Carlson a former sales manager from Cook Brothers to form Bemars Inc. in Montebello, CA. They came up with the unusual name “Bemars” by combining the first names of their wives, Beverly, Margaret and Mary. 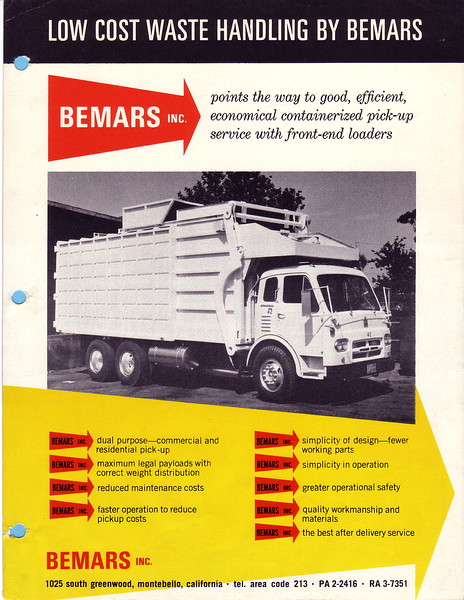 Quickly growing because of their quality workmanship, Bemars became one of the top three refuse equipment manufactures in the Western 12 States by the mid 1960’s. They offered a Full, Partial and Top Pack version Front Loaders as well as Roll Off and Container Delivery trucks. The firm remained popular and prosperous for 12 years until they decided to dissolve the partnership and sell the entire company to Maxon Industries in 1972.

Maxon, who had purchased Western Body and Hoist two years prior, became the largest refuse equipment manufacturer in Los Angeles overnight, rivaled only by Bowles. Brand new to the refuse industry, Maxon continued the Western and Bemars equipment lines as a subsidiary until the late 70’s when they dropped both names and restructured everything under Maxon only.

After the partnership dissolved, it is unclear where Ken Carlson went and my research has not supplied any further history. Dewayne Bolme went to go run the sales department for Chet Ott at C&O Manufacturing in Santa Fe, CA bringing many of his Bemars customers to this new company. After C&O sold to Dempster in 1983, Dewayne finally retired to continue refining his golf game.